I’ve been working as a database engineer for over a decade, engineering enterprise data platforms. During the beginning of my career in early 2000, I chose the ‘safe’ path of being a DBA believing that relational systems being universal containers for storing critical data will never change. I started learning relational technologies like Oracle, MS-SQL, and eventually also learned Open Source systems including PostgreSQL & MySQL.

However contrary to my belief, enterprise technology did change a lot. Some things however remained constant like developers swinging by my cube to request a new database, performing DB refresh or tuning  a slow running query (my favorite). Sometimes these teams were frustrated with me when their app went down or when they couldn’t access their database. At times, my Dev and QA friends would come by my desk to learn what I was doing and even after my attempt to explain them how I am solving their production issue, they would walk away puzzled. I have grown up in this role realizing that a when things go wrong, the first one to be blamed is DBA (i.e. Default Blame Acceptor)

This was my life for long and as you might have guessed, it wasn’t very satisfying; professionally 😉

It was a vicious cycle of configuring environments, routine data refreshes, resolving outages, and late-night upgrades. The work which once gave meaning to my career, lately made me ask myself, “Is this it for a DBA?” , “Is it the time to change?”

I then started having discussions with my leaders, determined to find an answer to “What’s the future of my role?”.

During these discussions, I heard terms like Agile, Scrum, Continuous Delivery and DevOps. Since the last one was repeated more often than others, I started researching on “Skillset for DevOps”.

Initially I was all excited to learn a new skill set, maybe a new tool, however after multiple days of googling, I couldn’t find any specific Skill Set definition. During a follow-up discussion with my mentor, I learned something interesting,

“Think of DevOps as not a specific skill set, instead it’s a way of doing something.”

Wait, so all it means is Dev and Ops working together, that’s sounds weird! So now I have to learn all languages used by developers…C++, Java, Python…ugh? While I’ve been coding on PowerShell & SQL for infra automation, I never considered myself as a developer. Hmm…maybe that’s what needed to change.

In the past couple of years, there is a rise of a new programming language Go lang (or simply GO). Most developers in their code will have to interact with the database at some point in their project, and often that means working with PostgreSQL. I particularly got interested in learning Go’s integration with PostgreSQL. There are multiple Go libraries that allow Go PostgreSQL integration productive and fun. Excited about my journey and want to share whatever I’ve learned recently…so in the next few posts I’ll blog about PostgreSQL integration with Go.

Disclaimer: By NO means I claim to be a Go expert and I am not going to teach Go lang. There’s a lot of great online courses and material for that. I am only going to share my learnings on Postgres integration with Go.

VS Code has a rich extension API that let you add languages, debuggers, and tools to your installation to support easy development. PostgreSQL extension allows following: 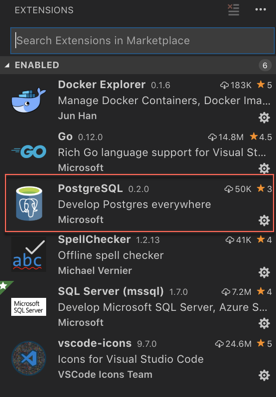 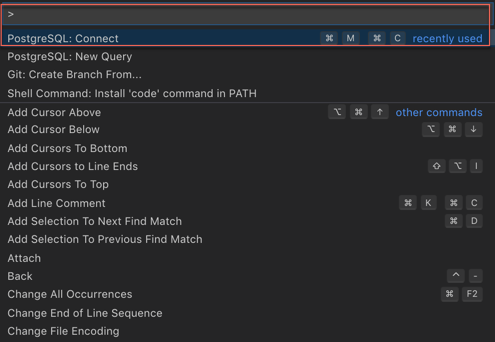 You are now connected to your Postgres database. You can confirm this via the Status Bar (the ribbon at the bottom of the VS Code window). It will show your connected hostname, database, and user.

6. You can also save the query results as JSON, CSV or Excel.

So now, you can seamlessly code for PostgreSQL from Microsoft VS Code without switching screens, leverage powerful intellisense and execute queries.